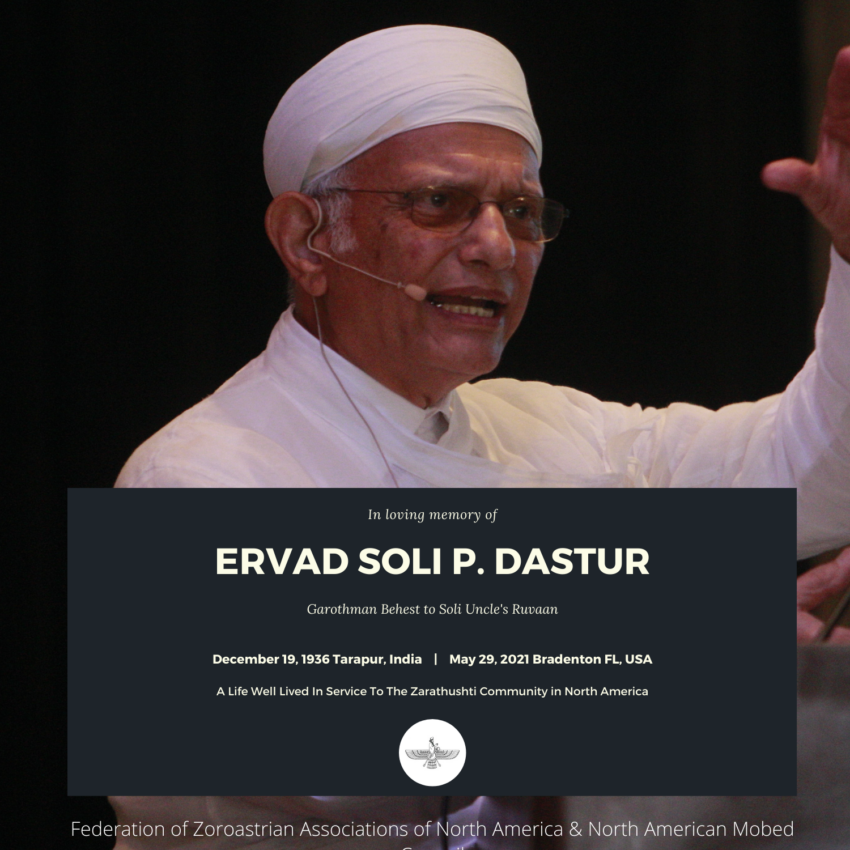 As the youngest of 11 children Soli was in born in Tarapur, a small village, , to a priestly family from Udvada. he joined the M. F. Cama Athornan Institute, where he completed all the requirements for becoming Navar, Martab and Saamel and was initiated as a full-fledged Mobed in the Udvada Iranshah Atash Behram.

On completing his B. Chem. Eng. from the Bombay University, and M. S. and Ph. D. in Chemical Engineering from the Northwestern University, Evanston, Illinois. Soli joined the Procter & Gamble Co. in Cincinnati in 1964 and after retiring in 1994, he worked as a partner in the Partnering Group for 5 years.

An active member of the North American Mobed Council (NAMC) Soli has been performing Mobed duties all over Florida and North America wherever requested. In 2009 he started and continued for 8 years the first ever annual all Florida Muktad Gatha prayers in Miami, has conducted Religious classes  in Tampa, Orlando and Miami started a teleconferencing ZRC and conducted 17  Tele Classes. Soli has published 395 Weekly Zoroastrian Scripture Extracts (WZSE) with translation and audio recitations, distributed to over 900 people. He has contributed articles in WZO Hamazor and FEZANA  Journals.

He was awarded the Outstanding Zarathushti Award by FEZANA in 2010 at North American Zoroastrian Congress, Houston, and the  Distinguished Scholar Award in 2018 from NAMC at AGM in Washington DC and the Ervad Darab B. Unwalla Award for 25 years of dedicated service to ZAFat  the 25th anniversary  of ZAF.in 2019  Soli retired and lived in Bradenton, Florida with his wife Jo Ann of 54 years. They have twin daughters, Shirin and Anahita and five grandchildren. Soli was an avid tennis player and dabbled with the computer in his free time.